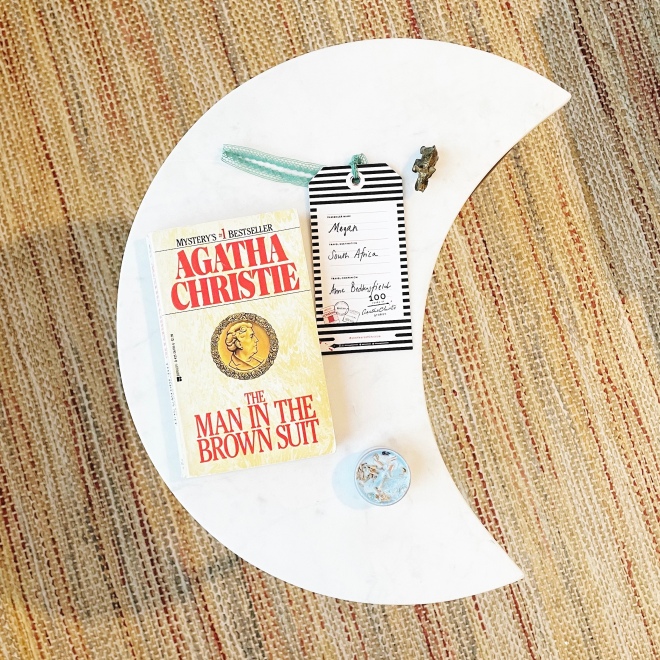 Review: The Man in the Brown Suit

Do you ever just have one of those Mondays when nothing has really gone wrong but it’s Monday and raining and you are just…done? Because, same. Hence, here I am at around 8pm on Monday night (because I couldn’t drag myself off the couch any earlier than this) writing my (hopefully coherent) thoughts on my Reading Agatha book club’s January pick.

Choosing books for this year’s round of Reading Agatha was fun because I feel like a lot of the jitters and imposter syndrome from year one have faded and choosing books that I think would be interesting and different. Which leads us too…

January’s Pick: The Man in the Brown Suit by Agatha Christie

This was not a new read for me but I also enjoy it whenever I read it. If you are used to the somewhat slower mysteries of Hercule Poirot or Miss Marple, this book will feel drastically different but oh, it is fun. It follows young Anne Beddingfeld, all on her own after the recent loss of her father and ready for adventure. I will say this now–Anne is one of my favorite of Christie’s heroines. She is daring, smart, sweet, and has SO much gumption. Everything just seems to fall in to place around her and you want to believe it’s because she’s finally grabbing hold of the reins of her life. While the story follows Anne, it is also a dual POV story with the other POV coming from journal entries from another character: Sir Eustace Peddler. Anne has some humorous moments in her sections, but I found some of Sir Eustace’s comments on the world and people around him really entertaining.

This has the feel of a spy thriller with plot lines of missing diamonds, a shadowy Big Bad figure, political strife, government agents…and, of course, romance.

While overall I really enjoy this novel and would definitely read it again, it is not without its issues. When it comes to the romantic side of this story, Anne’s independence and self-sufficiency seem to go out the window and she blindly follows and loves another character who definitely is aggressive and on the toxic side. There were parts when I cringed because *red flags.* Even if they do feel weirdly suited to each other, I really didn’t like how her love interest was written because he felt too violent for you to be fully rooting for them.

I would really like a miniseries adaptation to be made of The Man in the Brown Suit because the way it is written I think fits a episodic storytelling medium over a film adaptation. Maybe someday I will get my wish! I think Emilia Clarke would make an excellent Anne Beddingfeld, just saying.

I think that’s about enough of my rambling for one night! Until next, keep reading!

Review (#giftedbook): Disconnected: How to Stay Human in an Online World
Review: Murder in the Mystery Suite
Review: A Lot Like Adiós
Review: (#giftedbook) The Ghosts of Rose Hill
Mini-Review: The Ex Talk
Review: Can You Forgive Her?