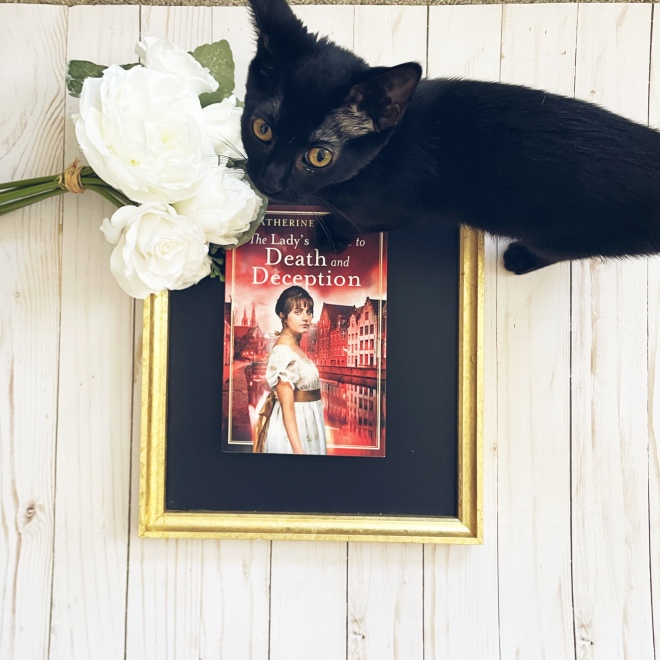 Book Tour: The Lady’s Guide to Death and Deception

Happy September Everyone! I’m so happy to be today’s stop in the book tour for Katherine Cowley’s The Lady’s Guide to Death and Deception.

Thanks to Austenprose, Tule Publishing, and Katherine Cowley for this free ARC in exchange for an honest review!

Book description according to the media kit:

What is a spy willing to do when both her heart and her country are at risk?

Life changes once again for British spy Miss Mary Bennet when Napoleon Bonaparte escapes from the Isle of Elba. Mary quickly departs England for Brussels, the city where the Allied forces prepare for war against the French. But shortly after her arrival, one of the Duke of Wellington’s best officers is murdered, an event which threatens to break the delicate alliance between the Allies.

Investigating the murder forces Mary into precarious levels of espionage, role-playing, and deception with her new partner, Mr. Withrow—the nephew and heir of her prominent sponsor, and the spy with whom she’s often at odds. Together, they court danger and discovery as they play dual roles gathering intelligence for the British. But soon Mary realizes that her growing feelings towards Mr. Withrow put her heart in as much danger as her life. And then there’s another murder.

Mary will need to unmask the murderer before more people are killed, but can she do so and remain hidden in the background?

This is the third book in Cowley’s “The Secret Life of Mary Bennet” series, and I think it was my favorite one! I really feel like Mary came into her own in this latest book and I was very intrigued by the romantic aspect of the story. I enjoyed the ups and downs Mary and Mr. Withrow experienced and rooted for them the entire time. The mystery was interesting and I truly did not guess the murderer’s identity. I also found this quite unputdownable–at one point I had to leave and stop reading, and I thought about the entire time I was gone! I hope there are more installments of this series–I would love to continue seeing Mary’s growth, and her deepening connections with her sisters!

While you could read this as a standalone, I think it is better to read the first two books prior to reading this one. Reading this story feels much more fulfilling when you have a better understanding of the characters that you get from reading the entire series.

Content Warning: There is on the page domestic violence, and the fallout from it. Please be mindful and take care of yourself.