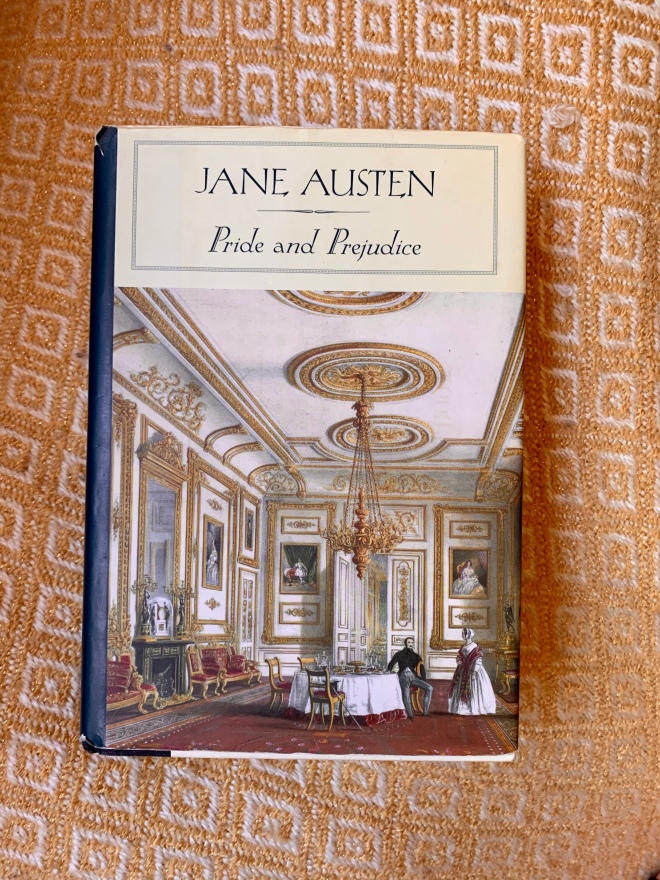 Reading the Classics: Pride and Prejudice

As I write this, I am currently watching the 1995 BBC version of Pride and Prejudice, and as soon as this version is over, I will be watching the 2005 film version with Keira Knightley. I LOVE this story.

I first read Pride and Prejudice my freshmen year of high school: my family had just moved to Oregon from California, I didn’t have any friends yet, and I threw myself wholeheartedly into reading classics. I fell in love with the story and the lives of the Bennet family. I loved it so much that I reread it my sophomore year, and wrote a paper on Austen’s use of satire. Since then, I have reread it a couple of times, seen many film adaptations of it, and read the rest of Austen’s works.

I returned to Pride and Prejudice last month, after rereading Emma in April (you can read that post here), and I loved all of the details that struck me this time around, that either I missed on previous reads, or had forgotten. This time, I found the humorous moments much more obvious. The sarcasm, witty observations, and satire was so enjoyable…even when it was made at the expense of other characters. (Sorry, not sorry.) Austen, as we know, shines when it comes to witty criticisms and satirical observations and insights regarding her characters and the class system.

Miss Bingley’s (single sister of Jane Bennet’s love interest, Charles Bingley) “plight” stood out even more during this reading. While it was obvious when I first read P&P that she had “set her cap” at Mr. Darcy, her desperation and meanness struck me more thoroughly this time. After their conversation at Bingley’s estate regarding “accomplished women,” Miss Bingley states,

“Eliza Bennet,’ said Miss Bingley, when the door was closed on her, ‘is one of those ladies who seek to recommend themselves to the other sex by undervaluing their own; and with many men, I dare say, it succeeds: but, in my opinion, it is a paltry device, a very mean art.”

The hypocrisy of this statement is quite clear, as this “mean art” is precisely what Caroline Bingley continues to engage with throughout the remainder of the novel. Unfortunately for dear Caroline, this does not succeed with Mr. Darcy, and does more to injure herself than to Elizabeth. Part of me wants to find something redeeming in her character…but it is difficult to find, because I don’t think we were supposed to find anything. Miss Bingley is a static character: unchanging and unpleasant.

As far as heroines go…I still love Elizabeth Bennet. She is clever, independent, capable…and is also able to grow and accept when previously held ideas are incorrect, and act accordingly. That kind of mindset is something that many would benefit from. As for Mr. Darcy, as taciturn and difficult he was, I still love him too. I love him primarily because he took the words Elizabeth threw at him “Had you behaved in a more gentleman-like manner” and worked on his attitude and behavior.

I’m not sure how controversial of a subject this is, but I have to throw out one more opinion…if I have to choose between the BBC version of Pride and Prejudice and the “Keira Knightley” version…I will choose the Keira Knightley version every time. It is beautifully done, I love her as Elizabeth, and did I mention it is beautiful?

Have you read the book? Do you like it? Do you have an opinion on the screen adaptations? Let me know! 🙂

Have a lovely weekend, and keep reading!

✨QOTD: Do you have a favorite independent bookstore?
💜Review: One Last Stop💜
✨Review: Cemetery Boys✨
✨Review: The Mystery of the Brass Bound Trunk✨
🫖Review: A Cuban Girl's Guide to Tea and Tomorrow🫖
Some recent-ish (including last month’s BOTM that I kind of forgot about) and book purchases!